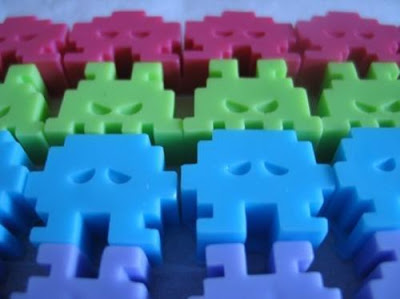 As someone who may or may not still have a Space Invaders comforter stashed somewhere in his parents' house, these little soap invaders quickly caught my eye. 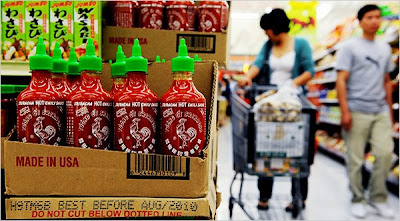 Tuong ot Sriracha, or Rooster Sauce as those in the know (or who can't pronounce the Thai name) call it, is my favorite condiment, and receives some well-deserved notoriety in this piece by John Edge for the New York Times.

The Rooster and I have a love-hate relationship: he can sometimes push a meal beyond glorious, but if you abuse him, he will peck your eyes out with a chili-powered fire beak. You heard me.

Thanks to Dano.
Posted by Unknown at 2:35 PM No comments:

Posted by Unknown at 1:56 PM No comments:

So Dick (The Manhunter) Cheney has recently chided President Barack (The Guy to Whom We Handed This Giant Bag of Shit) Obama for not releasing classified memos on the Bush Administration's use of torture to elicit information from terrorists, goat farmers, and German schoolteachers.

Cheney appeared on one of Fox News Channel's fair and objective pop-journalism talk shows to discuss torture, warrantless eavesdropping, and other facets of his plan to relegate the United States Constitution to several pieces of very old toilet paper. Cheney's verdict on his 8-year reign of anti-terror? "It worked." Fascinating.

In justifying his conclusion, Cheney cited several classified incidents which he couldn't elaborate on in which torturing people gave the United States the ability to thwart terror attacks that would have resulted in numerous American casualties. This is, logically, more than a little flawed, given that the legal and moral issue is not whether the interrogations resulted in usable intelligence, but whether the techniques amount to torture, which is 100% illegal under the terms of the Geneva Conventions, the United Nations Convention Against Torture, and United States law.

In essence, Cheney argues that because the ends justify the means, "it [torture] worked." This is a man who was a heartbeat away from the Oval Office for eight years.

Yeah, and then there's the "Saving American Lives" deal... Some numbers:

It is a poorly kept secret that Cheney, former Defense Secretary Donald Rumsfeld, and Deputy Defense Secretary Paul Wolfowitz were responsible for planning and executing the war in Iraq. Iraq, which gave the world nauseating images from Abu Ghraib, rape and murder by U.S. marines, and Blackwater contractors murdering 17 Iraqis in broad daylight in the middle of Baghdad.

Cheney did more to destroy this country's international credibility than any man in the history of American politics. In various older civilizations, he would have been shamed into killing himself for the abject failure of his designs. Instead, we give him a bully pulpit to justify the former administration's actions and attack those who are trying to clean up this mess. God Bless America, right?