Why I Love Football 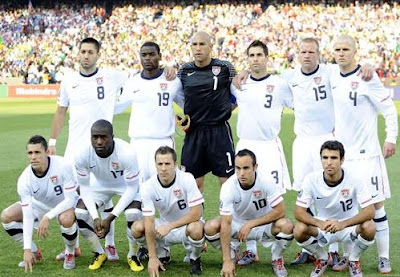 When I was young, my grandfather and I would play football in the living room. My goal was a long, low table crowned with little blue ceramic tiles which stood against the wall under two huge plate glass windows the overlooked Crystal Bay on Lake Minnetonka. His goal was between two potted plants on the opposite side of the living room. I loved the skill of putting the ball into tight spaces with my foot, and my grandfather, the greatest teacher a boy could ask for, nurtured that love and that skill until the game became, well and truly, a deeply rooted part of my life and who I am.

In elementary school I played soccer every day that there wasn't snow on the ground. There were no nets, just six foot high by ten foot wide wooden frames out on the field behind the playground. I was lucky to learn the game along with some other children who were truly gifted athletes. At that time, organized games on my youth league team were nothing compared to these pitched playground battles. I relished the competition and camaraderie that sports created, and football especially. I learned how to dribble around a team. To pass through them. To shoot over them. I learned everything I needed to know about football on that field, and I can still picture a few magical performances on warm spring days in my mind like they happened yesterday.

After high school, I gave up playing competitively. It was probably one of the things I regret most in my life. I became unmotivated, unhealthy, uninterested, and unhappy. It took a long time for me to realize what I am writing here, and how important the game really is to me.

I never completely quit the habit, of course. I watched like a fiend during the World Cup and club football seasons. I remember screaming at the top of my lungs after Landon Donovan scored the second goal that sealed the United States' win over Mexico in the 2002 World Cup (a game which, with all due respect to the recent victory over Algeria, was the most important in our history). I remember beating the floor of my parents' living room in agony when Gregg Berhalter's last ditch effort was cleared off the line against Germany in the following game, and I remember the crushing disappointment of 2006 when we failed to qualify for the knockout stages.

The point is, I am an American, and I love football. I have loved it for almost my whole life, and the bonds that it forms between people who care about it deeply have blessed me with some of the greatest friends I have ever had, and some of the fiercest rivals one could imagine. With that said, the life of an American who loves football can be a lonely one. No one was there with me to watch the Yanks' improbable march to the 2002 quarterfinals at 3:30 on a Tuesday morning. There were no takers when I ditched studying for the bar exam to watch the Oranje dominate the 2006 group stages, and nobody was interested in blowing off work to watch the 2008 European Championships. I was actually okay with being alone though. I didn't know what I was missing. Until now. 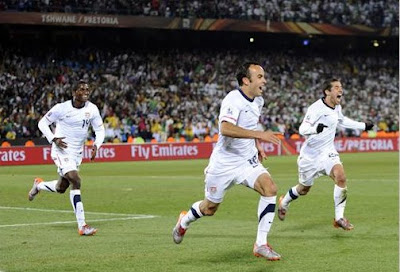 This American team has more guts and more belief than almost any other I can remember. After the disastrous opening four minutes against England, our defense stood up and were counted against a side with some of the finest attackers in the world. After giving up early goals again versus Slovenia, we battled back to tie the game and take another point. Two points from two games where the team could easily have folded, but they didn't. They wouldn't quit.

While there was talk about draws, points, goal difference, and other lamentable necessities of breaking ties, to me the math last night was simple: beat Algeria or go home. For 91 minutes I watched in a wretched purgatory as chance after chance from the US went wide, high, off the post, or into the keeper's arms. That is when Landon Donovan, the best player on our team, showed his quality by burning down the length of the field and finishing with calm precision to secure a 1-0 win and a first place finish in Group C. 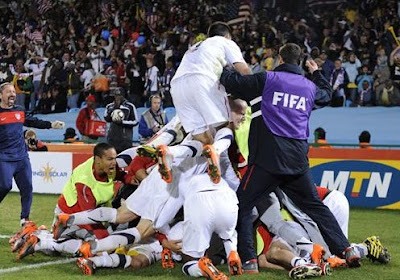 Last night I was not alone. I was with hundreds of fellow Americans who, while probably not as emotionally invested as I am, were still there and giving it their vociferous best (even if all they could muster were sporadic chants of USA! USA!). When the deadlock was broken, it was as if a dam burst. I have never experienced a reaction like that for a US game, and as absolutely corny as it sounds, it made me proud. The result was great, but the best part was, quite simply, that I was not alone any more.

Saturday may bring a win or a loss for the United States, but last night was like one of those spring days on the playground, or the afternoons with my grandfather: it is a moment that will never fade when I see it in my mind's eye. I am thankful for that. 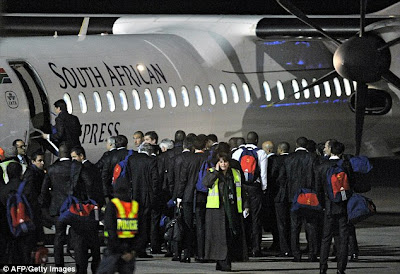 After behaving like petulent children for most of the World Cup, the French national team was mercifully sent home today, but not in quite the fashion in which they arrived: the disgraced team was ordered to fly economy class from South Africa back to Paris.

The move came at the request of the French FA (FFF), which has been rocked by the scandalous behavior of Les Bleus over the course of the tournament. The furor began when several French players were upset over French manager Raymond Domenech's decision on the starting lineups for the first two games.

The situation grew worse when the always-classy Nicolas Anelka referred to Domenech as a "son of a whore" at halftime during their loss to Mexico (after which he was summarily dismissed from the team).

The final crepe burst over the weekend when, after a dispute with the head trainer, France captain Patrice Evra refused to practice, as did the rest of the squad. After this last display of disunity, the managing director of the FFF resigned and left the team to return to Paris.

After a stern dressing down by the French minister of sport, Les Bleus rallied for the French people, getting embarassed by hosts South Africa 2-1 in their final tournament game. The FFF then ordered the team straight onto the bus which took them directly to the airport and out of the country.
What a selfish bunch of assholes. These people (players AND staff) are clearly incapable of seeing pictures of anything larger than themselves. I feel very sorry for French football fans who wanted to see the best players from their country put on a good show at the greatest stage one can play the sport on. You were cheated out of your World Cup experience by a bunch of arrogant, self-serving, egomaniacal jerk-offs who can't swallow their pride for four fucking weeks in order to represent their country. What a shame.

Posted by Unknown at 4:17 AM No comments:

Somewhat inexplicably, I love this.

via hypebeast
Posted by Unknown at 3:43 AM No comments: