[ED: This is part 2 of an indeterminable-part series on the island of Boracay.] 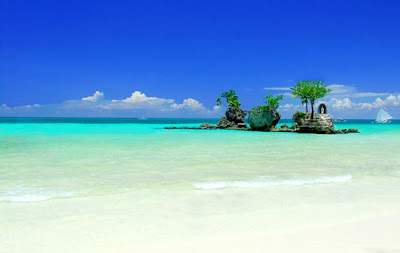 Whether by design or fortune, the descent from the clouds on a flight to Boracay from Manila will bring you suddenly out of the majestic tropical cloudscapes generated by the fluctuations of heated water and cool land and out over the blazing cobalt of the Sibuyan Sea. It is a breathtaking sight, an awesome view; a view which will suddenly be interrupted by a flash of white and brown and then a narrow stretch of green palms and jungle-covered hills before you burst out over the sea again. Then the coup des grace: The plane will bank hard to the left, and the port side of the plane, who all have their faces glued to the portholes like Augustus Gloop at the fudge shop, will have a brief, face-melting sight of White Beach, Boracay: the legendary Pearl of the Pacific. I will admit that it briefly blew my mind.

Then, my intrepid traveler, my backpacking impostor, before your grin can fade, the plane will level out, drop like a stone, and you’ll watch that soup of deep blue, sea foam, and jagged limestone teeth rise up to kiss you hello, and you may very well be a little frightened as you slam into the asphalt and gravel runway that is the dusty business end of the Caticlan airport.

Also known as the Paliparang Godfredo P. Ramos after a former congressman and native Malay (which is one of the numerous and baffling cornucopia of ethnic groups that form the population of the Philippine archipelago), this airport is something to behold. In fact, it’s not so much an airport as it is an airstrip. A very short airstrip. An airstrip which, according to my calculations and vast personal experience, is exactly long enough to avert certain disaster while landing a plane in ideal conditions.

This was not merely a case of a rough landing; the pilot was skilled and had probably made the run several hundred times. No, this was simply a case of the runway being too goddamned short for any sort of sensible use by any plane that weighed even one stowaway more than whatever it was we were toting that day. The plane stopped 20 yards from the jungle at the end of the strip and began the long (200 yard) taxi back to the “terminal.” Arrival.

The Philippines are not, by any standard, a wealthy nation. They do, however, like most tropical destinations throughout the world, attract a large number of foreign fatcats who want to soak up their sun, drink up their booze, and sex up their women (or men: Boracay has one of the largest populations of transvestites per capita in the world). It stands to reason, then, that someone somewhere would think to themselves, “Taxes. We need some fucking taxes,” and so they have.

Upon leaving Manila I was charged 250 pesos as an airport terminal fee. Upon attempting to leave the island of Panay for the nearby island of Boracay, I was charged 25 pesos for a terminal fee, 75 pesos as an environmental fee, and finally 100 pesos as my fare to actually take the banca across the channel. I paid the same terminal fees on the way back to Manila, plus another 750 pesos airport fee to leave the country. You must quickly become accustomed to the role of “rich tourist,” even if you are absolutely not, by any conceivable stretch of the imagination, rich. It’s just business baby, and you’re going to pay, somehow, some way.

Let’s be realistic though: all of that amounts to a paltry sum when you consider that similar accommodations in the Caribbean, the Med, or even Brazil will cost you a far greater chunk of cheddar. Boracay is a steal, pure and simple. 50 pesos for a cold San Miguel? Gracias, mahalo, kansahamnida. It’s all relative, and relatively speaking, it does not get better than this Pinoy wonderland. Boots on the ground. 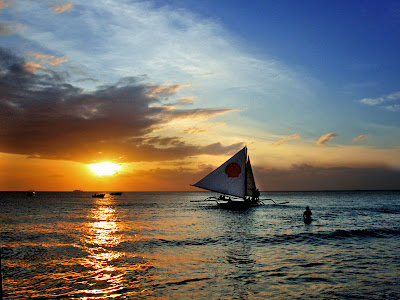 The week of September 19th, 2010 was Chuseok (I think that if you say chew followed very quickly by suck, you’ll be in the correct ballpark as far as pronunciation), the Korean version of Thanksgiving. If I choose to flesh this out more at some point, I suppose I’d better look it up, but for now it is adequate to say that this holiday netted me a 4 day vacation from the unrelenting pain of working for a company that is slowly making it's turns around an emptying commode. To celebrate, I booked passage to the island of Boracay in the Philippines—a country that I admittedly know little about (and knew even less before my exploratory venture).

I know that back when Japan was King Shit they tossed MacArthur out of those islands and onto his ass, and also that there was some intense fighting that took place there as we slowly climbed back up from the bottom of the Pacific around that great fat equatorial girdle and all the way to Okinawa, just before we killed off Japanese resolve; along with several hundred thousand civilians in Hiroshima and Nagasaki.

I know that Muhammad Ali fought Joe Frazier for the Heavyweight Championship of the World in 1975 in Quezon City, Manila. The fight could be called Ali v. Frazier III, but is more popularly known as the Thrilla in Manila. Ali and Frazier pummeled each other for fourteen rounds in that epic tilt; two great burly behemoths—both past their prime—scrapping like beachmaster elephant seals on some rocky spit of shore with nothing but their harems looking on and barking in wonder and terror. ESPN’s SportsCentury series declared the bout the biggest sporting event of the twentieth century. Who am I to disagree?

I know that there are a large proportion of Filipinos who are pretty unhappy with the political situation in their country pretty much all of the time. In fact, some of them have taken to violence if you’d believe it, and nearly every foreign ministry, state department, or foreign affairs bureau in the world will warn their respective citizenry to avoid the dicey terrorist hotspots of mainland Mindanao, where kidnapping and other less savory felonies are commonplace.

I also know that Imelda Marcos, the former First Lady, once famously declared, “I did not have three thousand pairs of shoes, I had one thousand and sixty.”

I arrived in Manila in the sweaty morning on September 21, 2010, only to find that the Ninoy Aquino International Airport is cooled almost uniformly to around 52° Fahrenheit. I had to be nimble with my clothing adjustments as I weaved indoors and outdoors while making my way from the monolithic PAL international terminal to the slightly less austere—and far newer—terminal 2.

Here followed three of the longest hours of my life as I was told repeatedly not to leave the gate where the plane I was to have boarded x­ amount of minutes/hours ago was still clearly not present, and therefore unlikely to begin boarding in a few short minutes as the gate attendant repeatedly claimed. I was hungry and more disgruntled than usual when the ATR 42-500 turboprop finally roared up above the gritty blacktop and tin roofs of Taguig and out over Laguna de Bay. En route.

Posted by Unknown at 9:37 AM No comments: