In the culmination of the best part of my childhood dreams (that didn't involve a spacecraft equipped with a hyperdrive), Yves Rossy, alias Jetman, has just released this video of him performing outrageous aerial feats with a bit of carbon fiber and two model jet engines strapped to his back.  That's not even a cursory explanation, that's literally what it is (okay that's not strictly true, but it is more or less an accurate description for those of us who aren't jet propulsion and/or aeronautical experts).

Having already demonstrated his prowess with the Grand Canyon as the backdrop for a previous YouTube sensation, this newest video takes things higher, to the Alps in his native Switzerland.  The video above isn't his first flight among Europe's tallest peaks, but if you take the time to browse the video of his previous flights, you can see his repertoire of maneuvers and skill at handling his invention are only getting better.


The specs for this incarnation of the wing have it weighing in at 55 kg fully fueled with a 2 meter span.  The power comes from four Jet-Cat P200 engines putting out 22 kg of thrust.  All of this combines to fire Yves through the air at an average speed of 200 km/h, and up to 300 km/h on descent. 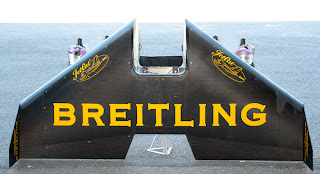 The controls?  Well, according to his site, the Jetman flies with "nothing but his body and feelings."  In effect, he uses the Force with a parachute and some rocket fuel strapped to his back.  Remarkable, amazing, and long may he continue unmaimed.


via Colossal
Posted by Unknown at 1:51 PM No comments: