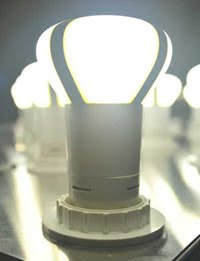 The L Prize is essentially an incentives package for new takes on Edison's (relatively) old idea. The most common lightbulb in the US right now, the 60 watt replaceable incandescent lamp, is one of the most horribly inefficient bulbs on the planet. In this country alone, there are about 900,000,000 of them.

The challenge is this: develop a 60 watt bulb that A) produces light at an efficiency of 90 lumens/watt (no clue), and B) lasts an average of 25,000 hours while C) maintaining the luminosity and warmth of the current incandescent bulb. Just so we're clear about the scope of change required, currently a 60 watt bulb has an average life of 1,000 hours and sucks up power at a far less efficient rate, in the area of 10 lumens/watt.

There is an identical contest for Halogen bulbs and another for a "21st Century" bulb that will be announced at some point in the future. If you are a light bulb crafter and wish to enter, the entry rules and specifications can be found here.

The pic at the top is the first entry in the contest, submitted by Philips, for the 60W bulb portion of the contest.

I myself plan to print the booklet and leave it on my coffee table with some nonsensical sketches and notes to impress the ladies.
Posted by Unknown at 1:31 PM No comments: 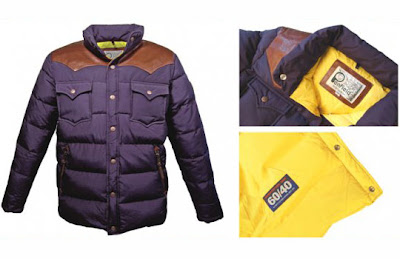 Getting a little nippy out there, amirite? Stay warm with this down stuffed jacket by Penfield, out of our very own Massachusetts, USA.

A big puffy $264, available here.
via highsnobiety
Posted by Unknown at 10:44 AM No comments: 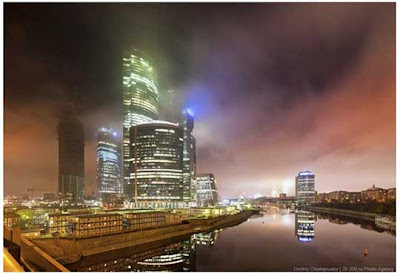 These just popped up over at Curated, and I thought I'd throw them in. I really like the whole foggy light thing photographer Dmitry Christoproudov has going on here. Ominous, like like that big Russian Bear should be. 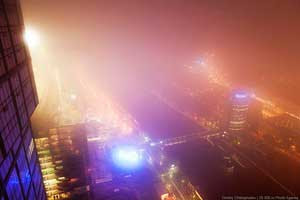 Holy hell I just found the image below along with some others at SpaceInvading. A must see! 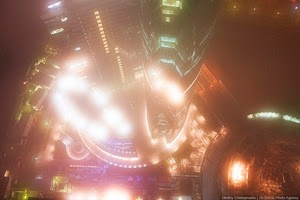 via curated
Posted by Unknown at 5:13 PM No comments: 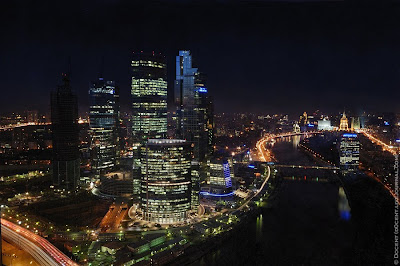 Some eye candy. The new skyline of Moscow, without St. Basil's and the Kremlin at the center. Really amazing stuff they're doing over there with their oil money, extortionist mobs, cutthroat business ethics, and KGB government. Glastnost and Perestroika for all! Gorby would be proud. 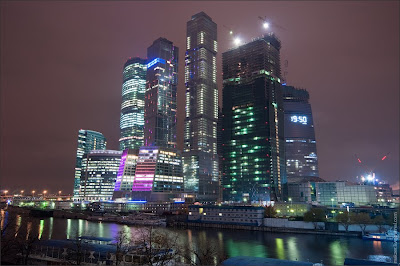 Hmmmm these look really crappy on blogger. Head over to skyscrapercity and get a look at them in hi-res. 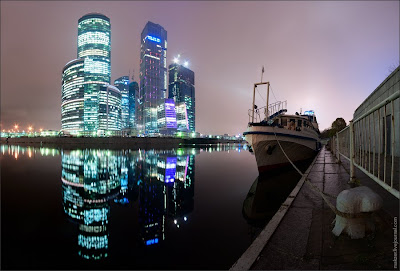 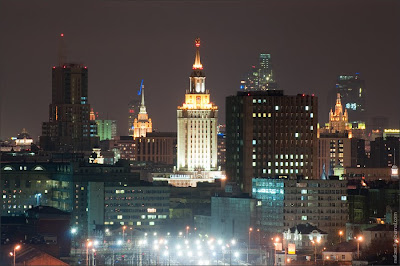 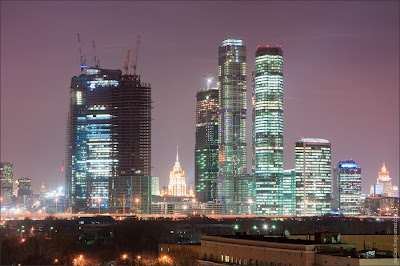 all these pics have little watermarks in the corner so I'm not going to bother crediting them, k? k.
Posted by Unknown at 5:06 PM No comments:

...you don't bury your ashes at your favorite team's stadium: 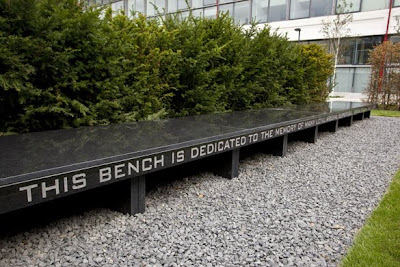 What you see above is a bench dedicated to some 500 Arsenal Gooners Football Club supporters (Americans: fans) who had their ashes buried under the pitch (Americans: field) at their former home, Highbury. I say former, because the Gunners have moved on, and the space is now occupied by...wait for it...condos. 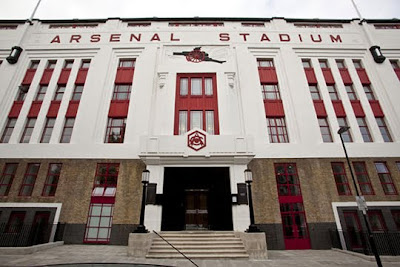 Beyond the fact that burying your ashes in a football stadium is tacky, it may also show some disrespect for your family, who are left to explain the whole mess. Nothing lasts forever, and that is trebly true in professional sports.

At any rate, the flats were developed "sympathetically," which I assume means they were developed retaining as many characteristics of Highbury, The Stadium as possible.

I would also submit that this was not sympathetic to the club or its fans, but so the developer could fetch an even more outrageous price for these North London golden eggs. 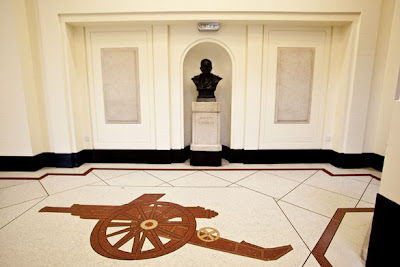 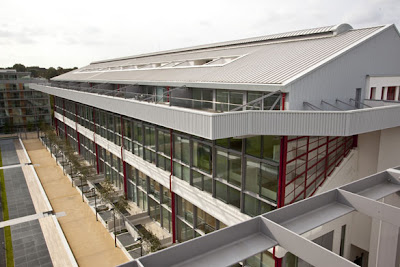 story via selectism, images via the observer
Posted by Unknown at 4:13 PM No comments: 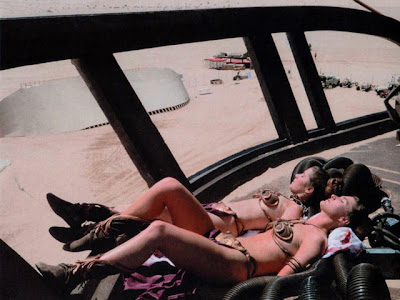 This is Princess Leia and her stunt double taking a sexy 5 on set during the filming of Return of the Jedi. So for a moment, I'd like to pay homage to one of the first female characters to provoke confusing feelings in my young body (the other: this young vixen from Teen Wolf).
Moment's over. Back to business.
via boingboing
Posted by Unknown at 11:21 AM No comments:


Wes Anderson re-envisions Roald Dahl's 1970s children's book about a fox in stop-motion animation. I just broke that down for you in one sentence. One.

Anyways, Wes has made a couple of my favorite movies, Royal Tenenbaums and Life Aquatic, but kind of lost me with his last picture, Darjeeling Limited. I sincerely hope he can make this great. It is certainly clear that he has taken great creative license, so the picture appears on the surface to have quite a bit of originality. 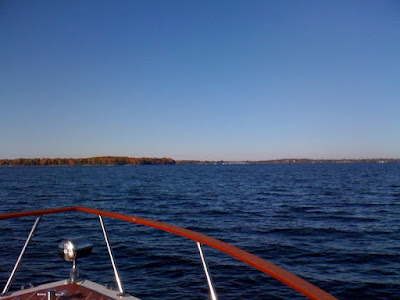 So I haven't posted here for about two weeks, and given that I generally piddle out something new at least a couple times a week I should probably discuss the reason behind my absence: work.

As you may or may not know, I'm a lawyer by trade. Since mid-June, I've been an unemployed lawyer. Well that was fun while the sun was shining, but as things so often come to pass when the Minnesota sun wheels ever lower in the southern sky, I found myself restless and in need of something to do as the leaves began to change.

It so happens that another equally predictable event comes to pass during my time of Autumn Angst: Lake Minnetonka must be depopulated of boats. Why? Because this is Minnesota and our water freezes two feet thick.

Upon the advice of a friend, I consulted a gentleman (actually he's a rather crude man, though he claims to be sweet and innocent) who is engaged in the boat storage trade. He offered me employment for the Fall Haul, and I accepted.

In theory, the operation would work like this: a driver takes two boaters in a vehicle to two separate boats. The boaters load the boats onto trailers at a public landing, help the truck drivers strap the boats down, then get back in with the first driver to go pick up two more boats. In practice, the unpredictable nature of boats and the aforementioned gentleman boat bailor often combined to make the simple complex and the complex virtually impossible. As if this wasn't enough to contend with, Minnesota also enjoyed the wettest October in recorded history, including two separate occasions on which snow accumulated substantially. 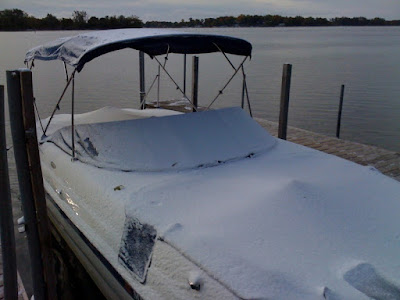 The days dragged on, and as they did the schedule became absolutely packed from 8 in the morning until 7 at night, six days a week. Nerves were frayed, and harsh words were frequently spoken about really inconsequential issues such as strap technique, trailer preparation, and other aspects of the trade. As I was a rookie--or in the parlance of the sea, a greenhorn--I had very little to offer during these debates, which was frustrating for me. Eventually, I managed to piece together enough knowledge to realize that generally, neither of the parties had any idea what they were talking about, and the basic motivation behind the debates was spite. 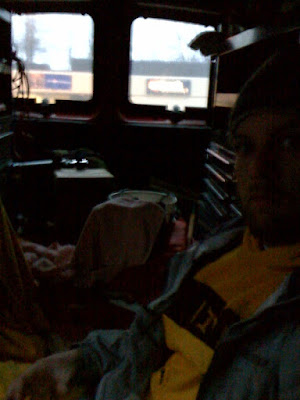 Even though co-worker interaction could be a little contentious, there were moments of levity and serene beauty that made the nonsense seem somehow worthwhile. On one run, I had to take a small Sea Doo around to the ramp on a rain-soaked 35 degree evening in the middle of the month. My feet were soaked because I had to beach the watercraft in order to tip it over and pull about 15 pounds of seaweed out of the jet intake, and I was strongly considering simply riding the thing to my dock, sinking it, and going home to take a warm shower.

As I rounded the point, the clouds briefly broke in the distance and I was treated to a beautiful play of light shining through cracks in the grey nether and sparkling off the surface of the water. It was a reminder about the impermanence of life and the miniscule time we actually have to experience it. The vision readjusted my perspective in a very humbling way, and I felt blessed to have seen it, and I was treated to that feeling almost every day in one way or another. 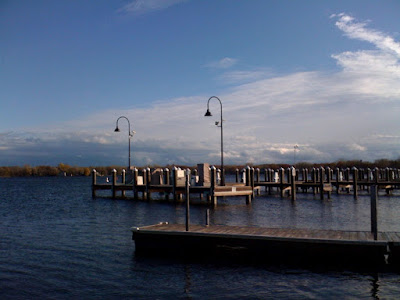 So now here I sit back at my desk, and the three hundred and fifty boats entrusted to the care of the gentleman boat wrangler are now safely stored in a clean, dry, modestly heated building in a place called Lester Prairie. While the process was not always smooth, in the end the job had rewards that I did not anticipate while forcing me to endure hardships I could scarcely have imagined. Whatever else it was, it was inarguably an adventure. 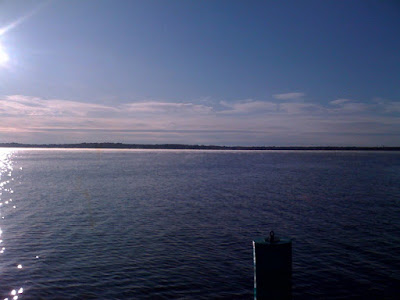 "He always thought of the sea as la mar, which is what people call her in spanish when they love her...The old man always thought of her as feminine, as something that gave or withheld great favors. If she did wild or wicked things, it is because she could not help them. The moon affects her as it does a woman, he thought." -Ernest Hemingway, The Old Man and the Sea.
Posted by Unknown at 9:24 AM No comments: