A truly magical four minutes of video. Beautiful score and camera work, and oh yeah, Guillaume Nery jumps down into the world's deepest underwater sink hole. Without oxygen. Because why wouldn't he? 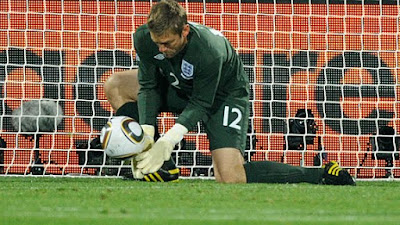 In a game which could have been a disaster for the US after an early Steven Gerrard strike, England goalkeeper Rob Green fumbled away two points for his side after allowing an innocuous Clint Dempsey effort to slide through his hands.

The English media have predictably crucified Green, completely glossing the fact that he kept the Americans from claiming all three points in the group match with a fine save from a Jozy Altidore effort, turning his strike off the post.

Also, I'm pretty sure its inappropriate to make comparisons between an oil geyser that is going to ruin the gulf coast of our country along with millions of lives who depend on it for their livelihood and a clumsy mistake in a football match.

Or maybe I'm just irritated I didn't think of it first.
Posted by Unknown at 7:37 AM No comments: