The album as a whole (Zonoscope, Modular 2011) is quite honestly stunning, and really sounds like an 80s supergroup that finally got their shit together and found a decent producer.

Well, it's actually better than that, but I just don't have the gumption for analogies at this hour. Euphemisms and innuendo are also right out. The ginsu replaced by the rolling pin. See what I'm saying?
Posted by Unknown at 10:35 PM No comments:

I try not to get to serious here in my little corner of the internet, so it goes without saying that I zealously decline to pursue political topics of any kind, and especially talking heads (not THOSE Talking Heads) who are like poison in the veins of the Motherland. People who, for whatever reason, seek to stir up ideological fervor in the name of holy and just righteousness, but whose only real goal is shameless and parasitic self-promotion of their agenda. People who are, ironically, so blind to their own myopic ambition that they become little better than a virus: spreading, poisoning, devouring, moving on. People without shame. People who, at least in my little corner of the internet, shall remain nameless.

via Justin Ivie
Posted by Unknown at 1:24 AM 1 comment:


Known far and wide as the Mecca of tow-in surfing, recently some intrepid souls hit up Peahi, AKA Jaws, the old-fashioned way: they paddled in. Dealing not only with the ferocious 20-foot-plus swell but intense offshore winds, Dan Healey and Greg Long (winner of the 2009 Quiksilver in Memory of Eddie Aikau) and a posse of others actually caught some solid waves. 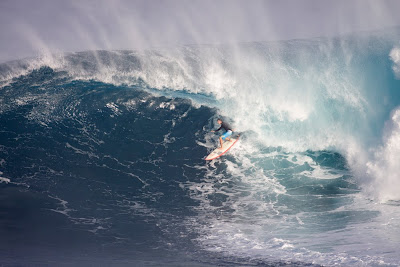 Above is a pic of Ian Walsh doing dangerous things, and below is a pic of the surfer who made Jaws famous--Laird Hamilton--from the film that made Jaws and tow-in surfing famous: the 2004 documentary Riding Giants. 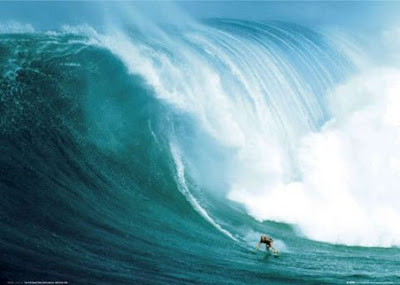