Two satellites collided on Tuesday about 500 miles above Siberia. One was a communications satellite owned by Iridium, a United States-based communications firm. The other was a Russian nuclear satellite which has been inoperative since the 1990s. Such collisions are exceptionally improbable given the vast area in which such space junk operates, and also given the fact that NASA tracks over 17,000 pieces of manmade space debris in order to prevent just such an incident. Some of the space junk tracked can be as small as four inches. For those keeping score, that means that the US government is able to track a Sharpie flying around the earth--in space--at 27,000 MPH, but somehow cannot manage to balance its checkbook.

The debris is spread out over hundreds of kilometers in orbital space and could pose a danger to the Hubble Space Telescope as well as other satellites and future space missions. The International Space Station is potentially another target, but NASA says that the risk falls within acceptable parameters. Acceptable parameters... that sounds so robotic and sciencey. 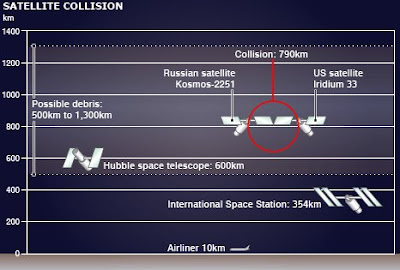 According to the BBC, Russia has yet to comment on claims that the satellite was out of control.

I hope those poor bastards at Iridium are insured, because I'm going to go ahead and say that Russia isn't going to cover the repair bill out of pocket. Is space a no-fault jurisdicition? Who insures spacecraft? Well if they are insured, Iridium is probably going to have to swallow a massive jump in their premiums... hopefully they haven't had any other accidents or moving violations in the last 5 years. Russians are terrible drivers.

via bbc
Posted by Unknown at 1:08 PM No comments: 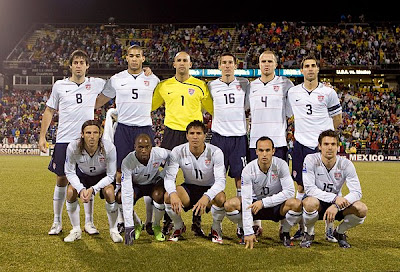 Yes, more sports. I promise this is not a trend, but I must give props to the US Men's National Team for dominating Mexico last night in the first game of final round qualifying for the 2010 World Cup. Michael Bradley scored in the 43rd minute and again in stoppage time at the end of the game while Tim Howard kept the ball out of the net for the shutout. Next up: El Salvador. 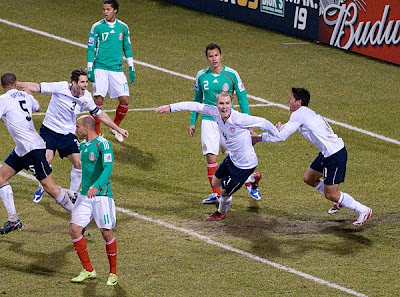 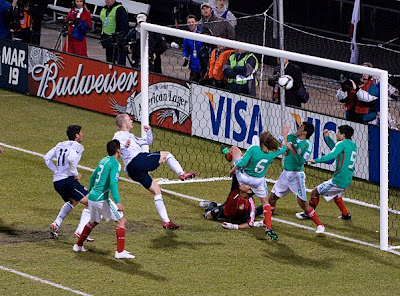 Images via ussoccer.com
Posted by Unknown at 1:40 PM No comments: 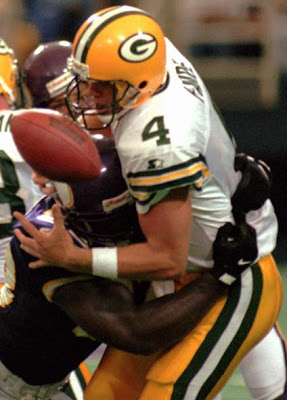 GTFO. Look it up.
More here if you care. That link should really send you to hell, but it doesn't, I promise.
Not yet.
Posted by Unknown at 8:27 AM No comments:

The Pains of Being Pure at Heart 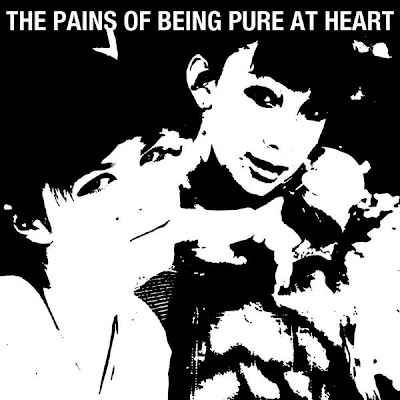 So while this may not technically be my first foray into writing about music, I am still rather uncomfortable with the whole deal, mostly because for the past 20 years or so I have done very little in the way of making music, and therefore I feel rather like Sarah Palin discussing strategic arms control.
I can appreciate lyrical genius and composition as much as the next rube, but typically big sound has always been what it takes to raise my heart rate. When it comes to pop/rock music, I could probably deal with the lead singer of the Decembrists' vocals so long as there are 30 guitars and a 17-story bass played by King Kong backing him up. I guess the most glaring example of this affinity for the heavy pop guitar would be Siamese Dream by the Smashing Pumpkins. Cherub Rock, the first song on that album, changed my perception of what pop music could be, and forever after I have always leaned toward artists who can emulate that wall of sound.
Anyway, The Pains of Being Pure at Heart released their debut album earlier this year on Slumberland Records, and they ride that sort of noise-pop vein with exceptional skill. Granted they probably have more in common with The Jesus and Mary Chain or The Magnetic Fields than the Pumpkins in terms of style and sound, but all four bands still come with that big fuzzy love. Being a pop album in this day and age, of course, they have some overly-tender emo moments, but overall their sound pleases me.
SO, without further ado, I recommend POBPAH's first album, which is self-titled (but fuck you I'm not typing it all out again), to anyone who likes distortion pedals and virtually inaudible mumbling vocals. That is a backhanded compliment rather than an insult, which is kinda how I roll, so deal.
Pitchfork rating = 8.6 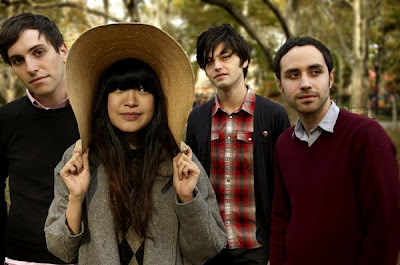 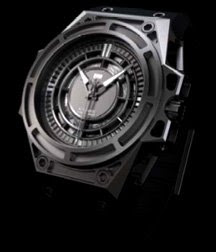 This is a high performance(?) timepiece from Danish designer Linde Werdelin that was originally designed for a famous mountain climber named Morten Linde before he climbed Everest. The design blends a lightweight exoskeleton with fancy shmancy watch guts to provide a design that is both rigid and durable while providing a striking, incomplete appearance.
I think this thing looks like a watch I would wear, but unfortunately since this particular timepiece will be produced in a batch of only 44, it will probably not work out for me. Sort of like the time I wanted to experiment with stopping bullets with my mind, or jump over that moving car. Actually its nothing like that. Anyway, the thing costs 9,000 euros, and I don't calculate monopoly money, so you'll have to do the legwork for that one on your own. 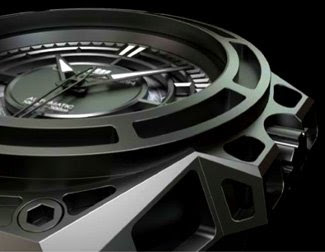 via CH
Posted by Unknown at 4:06 PM No comments: 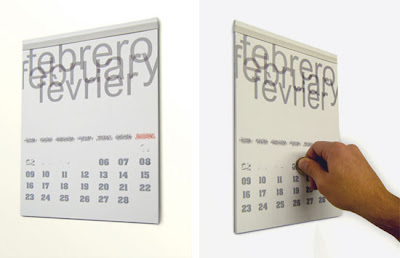 A great calendar concept by Madrid-based Mr. Tom, AKA Agustin Zea. Instead of crossing off the number of days left until you can remove the bandages without risking horrible infection, you can scratch them off! Hooray! 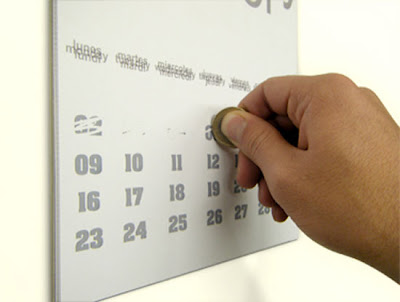 via designboom
Posted by Unknown at 2:09 PM No comments:

The Cold Steel Pocket Shark is a pen that... well i mean it is meant to... ummm... look I am just gonna plagiarize here because there is no way I can do this little bit of American crazy the justice it deserves, and I also do not want to be forced into an uncomfortable and super lame pen-mightier-than-sword quip:
"As the saying goes, "the pen is mightier than the sword." Indeed, Cold Steel makes some mighty strong swords, but this little pen makes for some clever competition. It's the biggest, baddest, permanent marker around!
Superficially, it shares many features common to most markers, but appearances can be deceptive. For starters, it's made from the glass-reinforced plastic, Grivory, the same tough material we use in our NIGHTSHADE SERIES, and features walls that are 4 times thicker than similar markers. This means it's built for impact and, in a self-defense emergency it can become an efficient Yawara stick for driving off an attacker. Plus, the screw-top cap will stay in place and won't pop off like a regular marker's cap would when you strike a percussion blow, or when obtaining joint locks or submission holds."
I thought at first that perhaps there was some sort of hidden knife blade, but it appears after some rudimentary analysis that the only stabbing portion of this device is, in fact, the pen tip itself, and the purpose is not really to stab, but to use the blunt nubs on either end to stun, bruise, jab, and generally hurt your opponent.
If you have a moment, I recommend looking at some of the Warrior Lifestyle videos on the Cold Steel website. Not because they are really good, or even entertaining. You may want to watch them simply because it is important to know what sort of people you might be dealing with out there in the wide world. People who make and/or use crazy knives.
via boing boing
Posted by Unknown at 2:37 PM No comments:

So maybe Kanye can't design shoes, but when Big K, the Jigga Man, Lil Wayne, T.I. and an ULTRA PREGGO TO THE POINT OF CREEPY M.I.A. hit the stage together it is gonna be epic every time.

Sweet fancy Moses where does one shop for maternity clothes like that? If anyone knows, I'll make a couple calls and have the place firebombed immediately.