[ED: This is part 3 of an indeterminable-part series on the island of Boracay.] 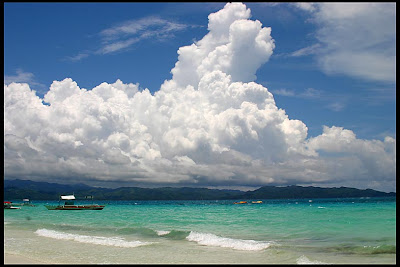 The only mode of land transport for a true backpacking impostor is the tricycle. This is basically an aluminum cart/sidecar welded on to a 50cc dirt bike running on bald street tires and watered down petrol. Top speed ranges from 2 to 15 miles per hour depending on the grade, and if you’re taller than 5’2” you’ll want to diligently brace your arm against the tin canopy and iron support frame or you could find yourself unconscious after a downhill pothole or flat on your ass in the street if you’re going up.

While you attempt to find someone to drive you, you will be accosted by people who want to sell you a place to stay. If you don’t have a place and have a knack for bargaining, you might want to try this out. If nothing else, you will have your interests zealously pursued by the man/woman who has attached him/herself to you in a way that, metaphorically speaking, is not dissimilar to an anaconda attaching itself to a capybara. If this sounds unpleasant to you, or you’d rather just find your own place to stay, say “no, thank you” frequently and vigorously to anyone who asks you anything on the quay, or just make reservations ahead of time.

For myself, I braved the cold embrace of the anaconda, and was rewarded: I wanted a quaint, simple place at the shore. With air-conditioning, of course, and a mini bar; anaconda wrestling is thirsty work in the heat of a Boracay afternoon. Also it was Tuesday, and the Red Devils of Manchester United would be facing off against mighty Scunthorpe in the League Cup. Satellite cable would be essential, as the premier sport in the Philippines is basketball, and I was sure that all the sets on the island would be tuned in to the perpetual reruns of the Seattle Storm and Atlanta Dream facing off in the WNBA finals. “Quaint and simple,” I said to the anaconda, “no need to fuss,” and the anaconda obliged.

After the jarring ride down the main road and up the narrow, winding ravine of an alley that ran between the faded pastel walls of deserted and padlocked shanties that would be packed to the gills come December, we arrived at my suite. After a quick analysis of the situation revealed my room to be almost, but not quite, the exact opposite of what I had asked for, I made my way back into the street where the anaconda swept me to and fro over the uniformly sandy and uneven cobbles to shithole after miserable shithole until, finally and without fanfare, we arrived at the final destination; the last shack on the block.

On the beach. Second floor. Satellite television. Mini bar. No fuss…? Had I been able to stomach the presence of that wretched woman for thirty more seconds, I would have attempted to explain to her, with measured words, that she had just wasted a disgusting amount of my time. After all the nonsense, I was just happy to be able to set my pack down, change my shirt, and drink all the cold beer from the minibar as quickly as possibe.